One of my New OLD friends told me today, small changes and small "sameness" will get you through this. As simple as it sounds, it is the most profound thing I've had to think all week.  And I've had a LONG week my friends.  Filled with changes in routine and face to face meetings of the heart.

If you've ever read the 50 Things about me on my web site you know a little about these Mother's Day facts, but here's the rest of the story:  My husband's Grandmother's name is Catherine Zahn. She and grandpa had their first boy on May 10th.  He (my father in law) grew and married a woman named Katherine, who then was called Kay.  Kay Zahn (aka: MiMi).  She and dad had a son on May 10th (my husband) and he grew and married a woman named Kay.  Kay Zahn (me).  Our first son was born on . . you guessed it . . May 10th.  So on this weekend of Mother's Days and Birthdays our family feels very Blessed by our "sameness" and even though Dad left us almost 17 years ago (on Christmas Eve) we still put his name on the cake, and usually have 2 cakes because they can't fit it all onto one.

I don't know how "same" this Mother's day will be but we are going to do our best. There was a poignant prognosis for MiMi's heart which was described in slang terms as "a broken heart syndrome."  More specifically Takotsubo Syndrome, wherein the heart swells to a size/shape resembling a Japanese octopus pot (hence the name) during times of sadness, stress or memories of events and times.  Usually post menopausal women.  It presents like a heart attack (high enzyme levels detected) but is not and usually does not damage the heart.  Often (normally?) it will regain it's shape, size and strength with rest and therapy.  But MiMi is very tired.  She has suffered a trauma with the fall that clearly is challenging her will right now.

What we are going for now is "sameness" and to get her home.  In her own chair. (It's a cool one with control to stand up, lay down flat, or anywhere in between.)  If she could be in her own space watching Wheel of Fortune on our big screen TV instead of the little one up in the corner of her room . . well, she'd be comforted greatly.

We did watch Bob Ross on my DVD at the hospital (many times) but it wasn't the same.  I don' t know if she can see the screen with the patch on her eye anyway, but she could hear him, and his voice does make you feel comforted.  He "god blessed" us many times these past few days. 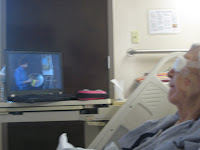 We are likely bringing MiMi home (in a week to 10 days) with hospice care.  The services and people available to help give me confidence to know we can do it better here at home than anywhere.  She was released from the hospital to a nursing facility to help get her strength back but I'm sure she'd rather be home.   I was hoping it would be by Mother's Day, but it may take a little longer.

We are very hopeful to have a few more Mother's Days before she goes to be with Dad.  I'm sure when she does, she'll be planning the parties up there as they watch over the rest of us.  I know Dad did after he left.  How else would I have been so lucky? 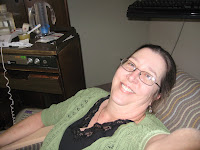 We will have a lot of little changes before we get to our sameness.  I'm tired of sitting in a hospital chair.  I look like it too.  I can't believe I did one of those "shoot your own photo straight arm" things but I did.  I have that "calf sucked on my head look".  I think that is an old Iowa saying.  Or at least MY mom used to say it back in Iowa!


Oh yea, mother's day.  I should stop in and see my mom too. AND I should say Happy Mother's Day to all of my friends.  New and old. I like to think that all of my old friends from high school are all still kids, and we never got old.  But we did.  Older and wiser too. I wish I knew then what I know now, and I would never have let 30+ Mother's Days go by without wishing them all the very best from their families and friends.


That is really all there is in the end.  Family and friends. . .and technology of course. Without this stuff where would we be?  I mean look at Bob Ross.  He's helping me in so many ways and he was dead before I discovered who he was.  I realize the technology I found him on (pbs television) is pretty old school, but I love my old school as much as my new school.  I could go on, but I would just be boring you.  I'm using this as therapy right now, because I can't paint. I blog.

Happy Mothers day my dear friend..Please know Mimi is in my prayers

Happy Mama's day. I think getting MiMi home will be good for both of you. May G-d give you both strength and many happy mother's days!

Hopefully she'll be home soon so she can rest and heal. My thoughts and prayers are with you all.