What happened to my Bob Ross project (painting along with 390 episodes and sharing on this blog) you ask?

Well, it's sort of Resting in Peace right now. 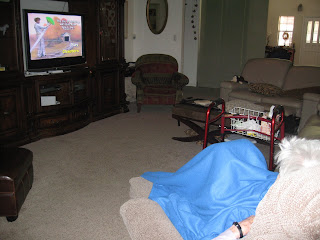 You see, I started only one year ago when after my Mother In Law was unable to live alone after a stroke, she came to live with us.  I discovered Bob Ross and the Joy of Painting on PBS one day when we were in the kitchen without cable. Bob had such a calming voice and slow pleasing style.  Mimi, who didn't talk much since the stroke, always found something to say after we watched.  Usually like " He . .  makes  . it . . look . . so  e a s y" (that's how she talked, very slow and labored if at all) so I knew she liked watching him too.

It wasn't long before I decided I couldn't just watch, I had to paint along.  And then the obsessive compulsive side of me took over and I not only wanted to paint along with Bob, I wanted to video tape myself doing it and then share it with the blogOsphere.  I always GO BIG I guess.

Anyway, I did 10 to 15 oil paintings.  5 of them were following the FIRST FIVE early shows of Bob's.  He was so young.  But as predicted (see my original posts about the attempt) I got bored.  FAST.  So I ventured into other mediums.  Tried acrylics, and watercolor . . but it wasn't until my sister in law introduced me to Pastels that I've really been painting a LOT.

One because while Mimi needed me, I could paint for a few minutes and then attend to her, and then go back to painting.  Five minute, Five hours or Five days later.  It was always there waiting for me to come back.

Mimi died on August 27th, 2010 and we had an absolutely wonderful Family event throughout it all.  Her  7 children were at her side along with various other grandchildren and of course her sons and daughters in law (like me ;) She died so peacefully.  The wake and funeral that followed was planned with loving care and made everyone in the family feel reborn. What more could a mother of seven, grand mother of 18 with 19 great grandchildren ever want from her death.  To know that her life mattered.  Here's how much she mattered.  On my YOUtube channel you can see all of these folk "singing'

Which brings me back to Bob.  It's amazing how many lives he touched.  I didn't know he existed when I was young.  Found him a year ago, fell in love with painting, and then found out he had been gone for years.  I think that's what Mimi and I found out this past year as she and I spent nearly all of her waking hours together, that it's easy to live like they were never gone.

But alas when I watch The Joy of Painting with Bob Ross, I remember Mimi.  I remember he's gone, and she's gone, and I get sad.  Neither of them wanted that, so I'm NOT going to be sad.  I'm not going to watch as much Bob Ross as I did prior, but that's OK too.  It's my world.  I can paint it however I like.

However is ANYONE OUT THERE has Bob Ross style work, photos video or otherwise to share, please feel free to do so.  Just email me at KayZahn at GreerAz dot com.