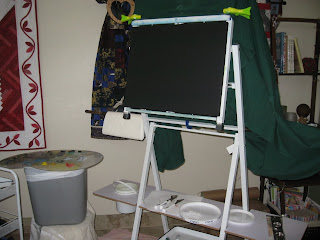 Sort of funny that I didn't know him as a child. We had pubic television. Heck I was ON "Bart's Clubhouse" in my home town (shout out to the Iowa folks from the 1960s) but I didn't see a Joy of Painting show until about 8 months ago when we hooked a tv up the the basic cable and couldn't get The Discovery Channel. . . but I digress . .

At the end of the last show he said we would be doing a black canvas. He said to prepare a canvas by painting it black with acrylic, and let it dry. So I did. Now I've watched the episode and he begins this one by putting Alys.Crimson in the center surrounded by Ph.Blue around it. The colors are transparent so you don't actually see them on the black canvas, until he started blending them with white.

What he didn't say was whether or not he put on the magic white (he still hadn't 'invented' his own liquid white, and used the Bill Alexander product . . . I love Bill Alexander too. They are putting a lot of his stuff on YouTUBE lately. I have watched a lot of him too. He's funny, in an old German Grandpa sort of way. Could have been MY grandpa) but again, I digress . . You might find I do that a lot.

Im guessing that at this early time (remember I'm on episode 3, probably from 1960's as well) there was no "magic clear" or "liquid black" or otherwise. I suppose one might have used Linseed oil on a dark canvas, because white would produce a grey effect. Nice maybe, but NOT what he was starting with.

He did say the Crimson and Blue were "transparent" and I don't know if he means the colors in general, or that he'd thinned them with something. His canvas still looks black AFTER he puts on these colors (he did this before the show began, and just "told" me about it, which is why I'm left wondering) but as he adds white to the center, it begins to pick up the red and blues, and they seem to be blending as if there is/was a liquid medium of some sort in play.

SO I'm going to make a big decision here. I'm going to decide to use liquid clear, or liquid black, or neither. I know what I'm going to do, but don't want to say so yet. Building suspense so that you just MUST come back when I'm done to see, or maybe so that you'll give me your advice and it won't spoil the audience pool. So I'll let you know, or you let me know. Whichever comes first.

I use black gesso on canvas and liquid clear. The aliz and pthalo are transparent colors... on any surface they require white paint to render them opaque. I love Bob Ross. I have been painting along with him for years! I just finished "silent Forest" (S:22 E:13) and it's my favorite black canvas painting by far!

Thanks. That clears up a lot of questions. I had Grey Gesso, but not black. But I'll bet if this were a later episode he'd have gone with that instead of acrylic underpainting. Your description of the Aliz and Pthalo sounds exactly right. That's why when he added the white, they came to life! I'm excited now. Today should be my day to paint. Yesterday was Mimi's shower day and her Priest came over to visit her, so I got sidetracked every time I tried to think about painting. Today could be my day!! I'd love to see a photo of your Silent Forest painting. The FaceBook page allows for uploads of photos . . or you could email me one. I just can't get enough of this right now. Thanks again for commenting and sharing your knowledge with me. That was excellent. Regards, Kay

Hmmm, lots of magic in this post...magic white, magic clear. Ah, the magic of painting. It's a world coming alive on a canvas!

googled black gesso and got here. Since your question has been answered already, let me just say, i have the same experience with bob ross. I grew up watching pbs and i remebered a white guy with a fro, but never cared until last year. I havent stopped watching ever since and took the plunge last fall to paint. Truly an inspiratuonal dude.