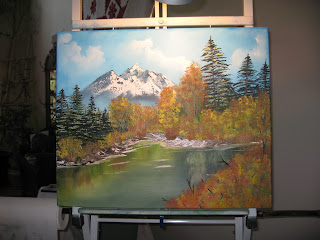 I really like your painting! I am so glad to have found your blog.... I am a beginner painter with Bob Ross!

Hi, Kay! I have no painting ability whatsoever, but from the picture YOUR picture is beautiful!

If it makes you feel better, even when I was extremely fit and active I was still having to pause my workout videos!

lol! Your writing style is delightfully frank and telling Bob Ross to slow down? I totally understand. What were you thinking? Knock out a painting in half an hour?

As for the final product, I think your mountains look really good even if they are floating a bit. And, what's wrong with Christmas trees? They're very handsome Christmas trees!

This blog is very inspiring. If I ever do have chunks of free time in my life (and funds for materials), I'd like to give this stuff a go.